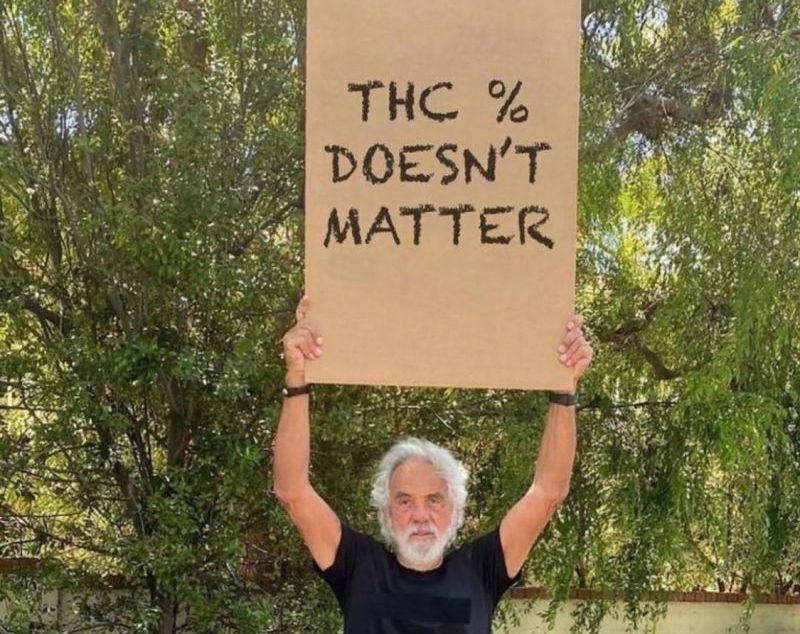 A recent Forbes article suggested that THC percentage (numbers) is the cannabis industry’s biggest lie. True enough, the industry is polarized on this issue which unfortunately impacts heavily on the product that ends up on dispensary shelves. One dispensary owner said to me recently, “The rush for THC numbers is so bad that some consumers will not buy anything that is less than 30% THC. We have to sell what the market demands and not what we think is right for the market.”

Of course, THC has therapeutic benefits that compete well against those offered by the model cannabinoid CBD which though psychoactive, is completely non-intoxicating. However, THC stands out for its intoxicating benefits that are  hyped to boost creativity and culminate in boundless laughter. For recreational users, that should be the IT factor, right?

Is THC Percentage the IT Factor for Dope Cannabis?

Tommy Chong who is hailed as one of the cannabis greats doesn’t seem to believe so. The image attached to this article shows Tommy Chong holding a placard with the words, “THC% doesn’t matter.” A few other legends, especially the proponents of the entourage effect, hold a similar belief. And so does the Forbes article mentioned above that suggest that THC numbers are a scam after all.

If that’s at all true that THC doesn’t matter then why don’t we go right ahead and smoke CBD flower and get high?

It’s all in the terpenes.

The entourage effect is a term that was coined by two founding fathers of cannabis, Raphael Mechoulam, and Shimon Ben-Shabat in 1998. It is the suggestion that when terpenes are added to cannabinoids such as THC or CBD the resulting effect is both amplified and prolonged in such a way that “the whole is greater than the sum of parts.” This is what makes the argument that when it comes to the strength of a strain, terpenes have to be taken into consideration and not just THC alone.

Some of the most powerful cannabis strains have THC levels in teens (not exceeding 20). But unfortunately, they are falling out of favor as the market embraces strains that test above 30%.

To create products that are endeared to this market trend, unscrupulous manufacturers are bumping THC numbers.  Consequently, there have been reports of consumers “feeling nothing” after consuming “potent” cannabis strains with labels reading over 35% THC. This is causing a lot of confusion in the market.

When purchasing a cannabis product, the terpene and cannabinoid profile should be prioritized above the THC percentage alone. In Nevada for example, it is now mandatory for producers to list the top three terpenes in each product. This information should guide the consumer on the kind of effects to expect from each strain.

Science has now revealed that CBD may offset some of the negative effects caused by THC, allowing the user to enjoy the best of both worlds through the entourage mechanism. Some consumers have found that THC with CBD (with each exceeding 10%) can be a powerful combination for both medical and recreational use. Gradually, we expect consumers to become increasingly sensitized about the “truth in terpene profiles and lies in THC numbers.” This should lead to the discovery of the most effective cannabinoid and terpene combinations for certain medical or recreational goals. It should also herald the demise of the rush towards 40% THC.

Meanwhile, should we smoke CBD because THC doesn’t matter?

Not at all. While THC does matter in a strain, it’s not everything. For recreational use, some legends swear by the 15% mark if any level of intoxication is to be achieved. Anything below might as well be considered hemp. Increasing THC above that level for stronger effects might be a gamble as well. It’s the terpenes that add the extra chutzpah. But well, further science is needed to back these claims.

Why Males and Females Respond Differently to Cannabis