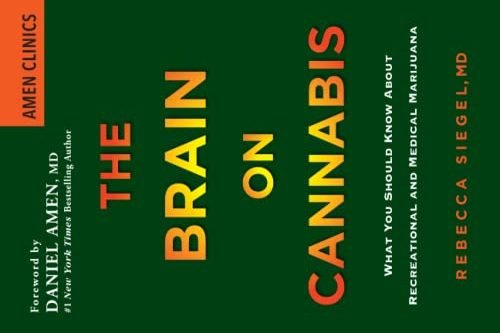 The brain on cannabis is authored by Dr. Rebecca Siegel, a psychiatrist, neuroscientist, and brain imaging expert currently working with Amen Clinics in New York City. She has specialized in assessing and managing anxiety, mood disorders, and ADHD using a wide range of therapeutic approaches including medical cannabis.

While medical cannabis is “controversial” in every sense of the word, Dr. Siegel works hard at dissecting rhetoric from both sides of the divide and presenting the truth in a very simple and practical way. This book can be seen as a rare myth-buster that tackles both anti and pro-cannabis propaganda that has for many years fueled skepticism from both camps. It’s a well-articulated exposition of the two schools of thought: cannabis is totally harmful versus cannabis is never harmful. On a lighter note, it can be seen as a euphemism for legalizing medical marijuana that at the end of the day presents the truth without ruffling feathers unnecessarily.

The book starts off with the basics of what marijuana is and explains the endocannabinoid system (ECS) in simple language assuming no prior knowledge of the same.

Dr. Siegel tackles the legality of marijuana at both the federal and state levels and goes on to explain the difference between hemp and marijuana and what this difference means.  Those conversant with the industry may find this bit a tad too basic but trust me, it’s a Eureka moment for those not in touch with the industry.

As the title of the book suggests, Dr. Siegel dissects the effects of both medical and recreational marijuana on the brain. Being a “brain scan specialist”, many would expect to see several brain CT reviews littering the book. That’s not the case at all. Instead, Dr. Siegel has opted to use several patient stories to illustrate her points which make the book very practical and easy to relate with. The brain CT approach would have been ideal if the intended audience was the medical fraternity exclusively.

She leaves several intuitive notes in the book to answer some of the questions that the audience could be having relating to cannabis which is very helpful.

Deep into the book, Dr. Siegel unravels science-based truths about what medical cannabis treats and what it does not. She breaks down the anecdotal evidence in cannabis and differentiates it from the evidence that has been obtained from randomized controlled trials (RCTs): the gold standard for clinical research. She touches base with the numerous “qualifying conditions” for medical marijuana across different states and explains what this is worth, vis- a- vis RCT and anecdotal evidence.   Throughout the book, Dr. Siegel emphasizes the need for “further studies” to paint a clearer picture of the short and long-term effects of cannabis. With over 30,000 cannabis-related studies conducted to date, cannabis enthusiasts may not take this viewpoint too kindly. But from a medical perspective, RCTs remain the gold standard and unfortunately, not many cannabis RCTs have been conducted to date. Some may also be affronted by the suggestion that cannabis “shrinks the brain.” But again, it’s science and unless there’s “other” science that proves otherwise.

“The brain on Cannabis” is a useful resource for anyone seeking to understand the science-backed truth on marijuana. It lays the foundation for a deeper understanding of the full therapeutic potential of cannabis as well as the potential risks and adverse effects. It’s a timely resource as the world moves towards full acceptance of cannabis as medicine.